Pay Commissions 7TH PAY COMMISSION, DEFENCE EMPLOYEES
The Seventh Central Pay Commission recommendations, handed over to the government in November, have aroused bitter resentment within the military. On March 11, the three service chiefs made a presentation to the "Empowered Committee of Secretaries", a 13-member panel headed by the cabinet secretary, which is looking into the recommendations. The army, navy and air force are waiting to see if this panel will tone down clauses that former army chief VP Malik has termed a killer for the military."

This impression is rampant amongst soldiers, sailors and airmen, even though the Seventh Pay Commission has raised baseline military salaries by about 15 per cent, taking the pay of a lieutenant (the entry grade for officers) to Rs 56,100 per month; and that of a sepoy (the entry grade for ratings) to Rs 21,700 per
month. This is significantly lower than the 40 per cent increases handed out by the Fifth and Sixth Pay Commissions. One of the Seventh Pay Commission members, Rathin Roy, underlining the imperative to curb government spending, has admitted unapologetically: "We are the stingiest pay commission, ever."

In addition to pay, soldiers get a special allowance called "military service pay", which exists in most militaries in forms such as the British army's "X-Factor Pay". The Seventh Pay Commission raises it for officers from Rs 6,000 to Rs 15,500 per month; and for persons below officer rank from Rs 2,000 to Rs 5,200 per month. 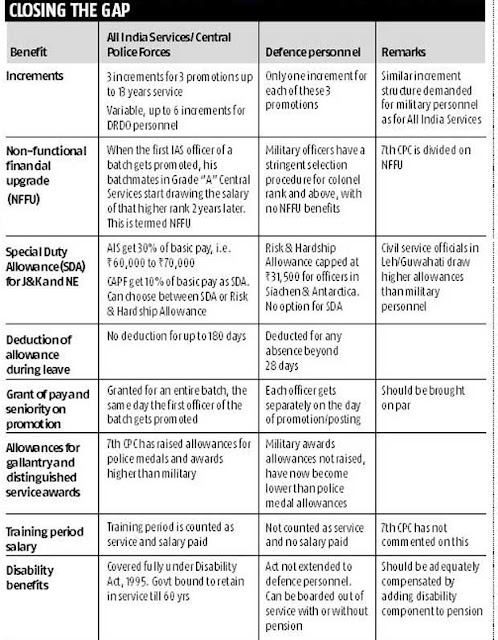 Totting up these allowances, the Seventh Pay Commission chairman, Justice Ashok Kumar Mathur, in an interview to The Economic Times on December 20, claimed he had recommended 30 per cent higher salaries for the military than civilian services would draw.

His logic was based on the dubious premise that military service pay constitutes a component of salary. In western military salary structures, such allowances are not salary, but compensation for the "intangible hardships" of military service. These include long separation from families, wives being unable to work, and children changing schools frequently and growing up without their father, et cetera.

During its deliberations, the Seventh Pay Commission asked the Institute for Defence Studies and Analyses (IDSA) to compare military salaries in India with those of major foreign armed forces. While the IDSA study was relatively unbiased, the Commission chose to interpret them selectively, applying purchasing power parity to boost the value of Indian military salaries; and then comparing them with the per capita income of the concerned country. Given India's abysmal per capital income, military salaries look good by comparison. The Seventh Pay Commission uses this to argue that India's military is paid very well by international standards.

It's the comparison, stupid!

Since the hefty raises of the Fifth and Sixth Pay Commissions, few soldiers claim they are poorly paid. Even so, festering resentment stems from the widespread belief that civilian officials, particularly from the Indian Administrative Service (IAS), conspire to whittle away the military's relative status. Soldiers point to a host of generous allowances and the assured promotion benefits that are triggered for entire civilian batches as a result of the first officer of that batch getting promoted. A key element of this was instituted by the Sixth Pay Commission through a mechanism called "non-functional financial upgrade". This mandates that when an IAS officer from a particular batch is promoted to a certain rank, all his batchmates from some sixty Group 'A' central services also start drawing the higher pay scale two years later, irrespective of competence or vacancies in that rank. The military had taken up a case for a similar upgrade, but this was not agreed to. The Seventh Pay Commission does not recommend its extension to the military either.

Thus, while practically every civilian central service officer would make it to the top pay grades, the army will remain a sharply pyramidal meritocracy, where less than one per cent of officers are promoted to lieutenant general rank (higher administrative grade, in pay commission scales). Those soldiers who do not make the cut - including meritorious officer, who are held back only because of limited promotion vacancies at each rank - are entitled to neither the power nor the pelf of higher rank since the army has no non-functional financial upgrade. The military's demand for parity has been one of the five "core anomalies" of the Sixth Pay Commission, and was strongly pressed before the "Empowered Committee" last week.

Adding to the bitterness amongst soldiers is the argument, increasingly voiced by civil service officers, that soldiers' emoluments should be evaluated in terms of "cost-to-company", taking into account all their emoluments and facilities. Top generals argue that the armed forces constitute "the cheapest gun fodder", since they incur the least lifetime cost to the government. They point out that soldiers incur the lowest induction cost, since they do not get paid salary during their training period, unlike civilian officers and the Central Armed Police Forces. They have the lowest retention cost, since they retire early, thus drawing salaries for less time than civilian counterparts; and they also have the lowest advancement cost, since relatively small numbers are promoted to higher rank, leaving many languishing at lower pay grades. Finally, soldiers also incur the lowest pension costs, since their pensions are fixed at 50 per cent of the last pay drawn - at lower pay grades in most cases.

The army has slowly - and sullenly - come to terms with the "first amongst equals" status of the IAS, which has been inexorably institutionalised since the Third Pay Commission noted that "an IAS officer gets an unequalled opportunity of living and working among the people, participating in planning and implementation of developmental programmes, working with the Panchayati Raj institutions, coordinating the activities of government departments in the district and dealing directly with the problems of law and order." Given this, the Third Pay Commission granted the IAS (and the Indian Foreign Service) three extra increments at each of three successive seniority grades - senior time scale, junior administrative grade and selection grade - to which IAS officers are promoted at four, nine and 13 years of service, respectively. Since the other services got just one increment at these grades, IAS/IFS officers accumulate six extra increments by the time they have served 13 years. This lead in emoluments continues through their service.

However, successive governments have ensured the military remains the "first amongst uniformed services." The Seventh Pay Commission now upsets this balance by recommending that "the criticality of functions at the district administration level holds good equally for the IAS, Indian Police Service (IPS) as well as the Indian Forest Service (IFoS)." It recommends that six additional increments be extended also to the IPS and IFoS.

The military chiefs have argued strongly before the "Empowered Committee" that the military - which they term "the instrument of last resort" - does not have the option of "handing over an adverse situation to any other government agency". They have argued that, while the police and central armed police force personnel often lay down their lives, including in cross border firing, they incur a "lower level of risk" compared with the armed forces, which "actively seek encounters with terrorists and close combat with the enemy, despite the high risk of death". The chiefs have argued that military service demands higher levels of proficiency, commitment and sense of sacrifice.

There is little to suggest, however, that the government is listening. The anomalies of the Sixth Pay Commission still remain unresolved, including the five "core anomalies" that include the military's demand for non-functional financial upgrade. A committee of secretaries that was constituted in 2011 heard the military for a month and then tossed the ball into the court of the Seventh Pay Commission. There is little to suggest the military's current representations would be treated with greater sensitivity. Source:- Business Standard
Read more
Facebook Twitter Google+ Pinterest Linkedin
DEFENCE EMPLOYEES
By Pay Commissions