A Delegation of Members of NJCA met to Cabinet Secretary, Shri P.K. Sinha on 07th Pay Commission Recommendations. On discussions, it appears that:

1. The Empowered Committee has made up their mind to recommend to the Government a slight increase in the Minimum Wage.

2. No indication was however given as to the consequential revision of the Fitment Formula and Pay Matrix.

3. There had also not been any hint about the need to restore the percentage of the HRA, which the 7th CPC has recommended for reduction.

4. On Advances and Allowances, abolished, the Government might be advised to setup a committee to go into the matter and make suggestions.

5. In the matter of the New Contributory Pension Scheme also, the Government might refer the demand to a committee.

6. Pension benefit to the retired personnel, who are covered by the defined benefit pension scheme, the Cabinet secretary indicated that, both the Department of Pension and Defence Ministry were of the firm view that the first option recommended by the 7th CPC to bring about the parity with the past pensioners being infeasible and impracticable (due to the non-availability of the requisite records) might not be accepted and acted upon.

The Outcome of the Communication of NJCA with Government on Recommendations of the 07th Central Pay Commission given below: 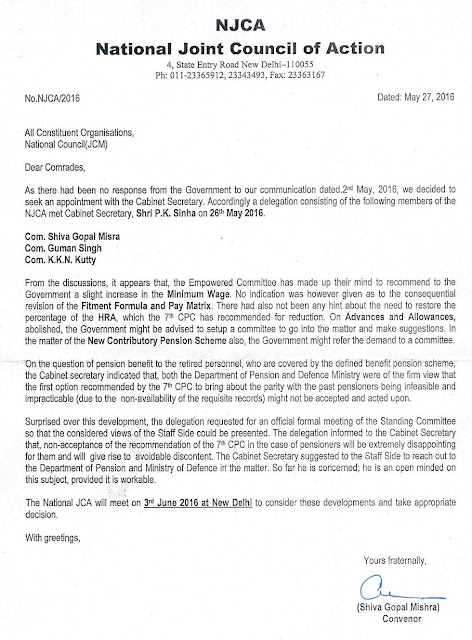