CLARIFICATION ON BENCHMARK FOR PROMOTION: DOP

No. 20-45/2016-SPB-II
Government of India
Ministry of Communications
Department of Posts
Personnel Division

Subject: Clariﬁcation on Benchmark for promotion .

I am directed to refer to subject cited above and to say that the modalities of the benchmark to be taken for promotion afer implementation of 7th Pay Commission Report has been examined in consultation with Department of Personnel & Training (DOPT). DOPT has stated that the modalities of the benchmark are being examined in consultation with UPSC and Department of legal Affairs. In this regard, all Circles are, hereby, requested to follow instructions contained in DOPT’s OM No. 35034/7/97-Estt(D) dated 8.02.2002 until further clariﬁcation is uploaded/issued by DOPT on its website or issued by DoP. A copy of DOPT‘s ID No. 1211382/2016/CR dated 8.12.2016 is enclosed. 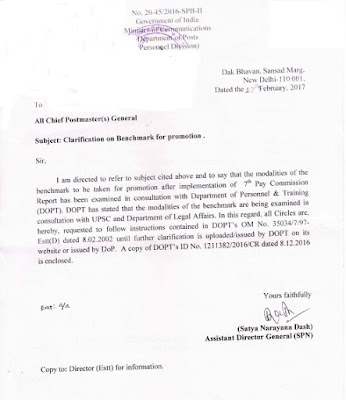