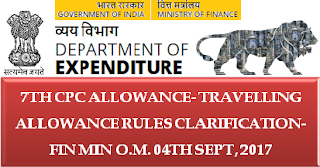 F. No. 19030/1/2017-E.IV
Government of India
Ministry of Finance
Department of Expenditure


Consequent upon the issuance of this Department's O.M. of even number dated 13.07.2017 regarding implementation of recommendations of 7th CPC on Travelling Allowance (TA), various references are being received in this Department seeking clarifications regarding TA/Daily Allowance (DA) entitlements of Officers in Level 13A, Level 13A (pre-revised Grade Pay of Rs. 8900/-) has been included in the Pay Matrix vide Notification No. GSR 592(E) dated 15.06.2017. 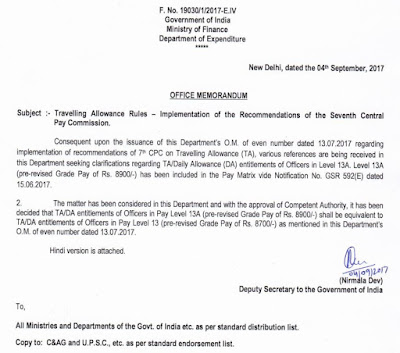