Revision of Pension in respect of Puducherry pensioners/family pensioners drawing pension under ex-French Rules on the line of revision of pension of Central Government Pensioners on the recommendations of 7th Central Pay Commission – regarding. 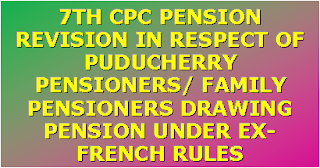 Subject: Revision of Pension in respect of Puducherry pensioners /family pensioners drawing pension under ex-French Rules on the line of revision of pension of Central Government Pensioners on the recommendations of VIIth Central Pay Commission — regarding.

2. The pensioners/ family pensioners, referred to above will also be eligible for dearness relief at the revised rates effective after the 7th CPC on the revised pension as per orders issued by the Government in this regard from time to time.

3. The pension/ family pension will be revised in terms of these orders by the Govt. of Pudicherry in each case individually and the revised pension payment orders will be issued to the concerned pension disbursing authority for arranging payment. It may be ensured that proper and thorough physical verification of the beneficiaries is carried out before revision of pension / family pension.

4. The above mentioned benefits shall not, however, be admissible in the case of Pensioners / family of the deceased pensioners who have opted for French nationality and are drawing metropolitan Pension from the French Government. 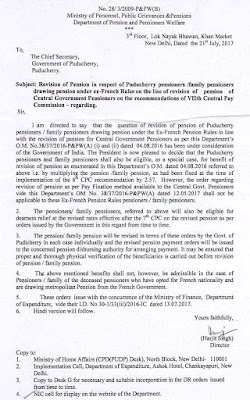