F.No. 225/270/2017/ITA.II
Government of India
Ministry of Finance
Department of Revenue
Central Board of Direct Taxes

The Goods and Services Tax ('GST') has come into effect on 01.07.2017. In recent days, dates for filing various returns and forms under GST have been extended by the Government. In this backdrop, representations have been filed by various stakeholders requesting for extending the 'due date' for filing various reports of audit as well as tax-returns under the Income-tax Act from 30th September, 2017 so as to allow sufficient time to the assessees' and tax professionals, and thus, facilitate their ease of compliance with statutory responsibilities under various fiscal laws.

On consideration of the matter, the Central Board of Direct Taxes, in exercise of powers conferred under section 119 of the Act, in respect of all assessees' covered under clause (a) of Explanation 2 to sub-section (1) of section 139 of the Act, hereby extends the 'due-date' prescribed therein for filing the return of income as well as various reports of audit prescribed under the Income-tax Act which are required to be filed by the said 'due date' from 30th September, 2017 to 31st October, 2017. 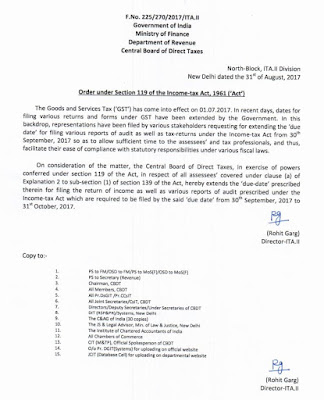