ENHANCEMENT OF AGE TO 65 YEARS OF SUPERANNUATION OF DOCTORS OTHER THAN CENTRAL HEALTH SERVICE (CHS) DOCTORS: CABINET APPROVES

The Union Cabinet chaired by Prime Minister Shri Narendra Modi has given its ex-post facto approval for enhancing the superannuation age to 65 years for doctors of Indian Railways Medical Service.

The Union Cabinet has further empowered respective Ministries/Departments/Organizations to take an appropriate decision in respect of the age of doctors for holding the charge of administrative position as per the functional requirement.

The decision would help in better patient care, proper academic activities in Medical colleges as also in effective implementation of National Health Programmes for delivery of health care services.

Around 1445 doctors of various Ministries/Departments of the Central Government would be benefitted.

The decision will not have much financial implications as large number of posts are lying vacant and the present incumbents would continue to work in their existing capacity against sanctioned posts.

• The age of superannuation of doctors of Central Health Service was enhanced to 65 years w.e.f 31st May, 2016.

• The doctors other than Central Health Service including doctors of other systems of Medicine of Central Government requested for enhancement of age of superannuation on the ground of parity with CHS and shortage.
****** 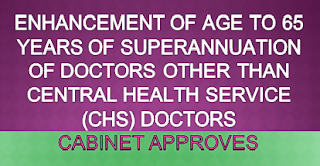