Grant of Educational Concession to the Children of Armed Forces Officers/Personnel Below Officer Ranks (PBORs) missing/disabled/killed in action. Dated 13.09.2017

Subject : Grant of Educational Concession to the Children of Armed Forces Officers/ Personnel Below Officer Ranks (PBORs) missing/disabled/killed in action:

Consequent upon the decision taken by the Government on the recommendations made by the Seventh Central Pay Commission (7th CPC) in Para 8.17.42 regarding enhancement of Educational Concessions to the Children of Armed Forces Officers/Personnel Below Officer Ranks (PBORs) Missing/Disabled/Killed in action and in supersession of earlier order No 6(1)/2009/Edu. Concession/II D(Res) dated 25th Oct 2010 on the subject, the President is pleased to issue the following instructions: -

(i) Tuition Fees: Full reimbursement of tuition fee (Capitation fee and caution money not included) levied by the educational institutions concerned (including charges levied for the school bus maintained by the school or actual fares paid for railway pass for students or bus fare certified by the Head of Institutes).

(ii) Hostel Charges: Full reimbursement of Hostel charges for those studying in boarding schools and colleges.

(iii) Cost of books/stationery: Rs. 2000/- (Rupees two thousand only) per annum per student or the amount claimed by the student, whichever is less.

(iv) Cost of Uniform where this is Compulsory: Rs. 2000/- (Rupees two thousand only) or the amount claimed by the student, whichever is less.

(v) Clothing: Rs. 700/- (Rupees seven hundred only) per annum per student or the amount claimed by the student, whichever is less.

2. The education concessions referred to above will be admissible only for undertaking studies in Govt./Govt. aided schools/educational institutes, Military/Sainik Schools and other schools or colleges recognised by the Central or State Governments including the autonomous organisations financed entirely by the Central/State Governments.

3. The above educational concessions will be available for school going children from 2 classes prior to 1st class up to and inclusive of the First Degree Course.

4. Re-imbursement of Educational Concession shall have no nexus with the performance of the child in his/her class. In other words, even if a child fails in a particulars class, the re-imbursement of CEA shall not be stopped.

5. The combined amount of Tuition Fees and Hostel Charges shall not exceed Rs. 10,000/-pm.

6. The concession shall go up by 25 percent each time DA rises by 50 percent.

8. The Educational concession referred to in this order will be debit able from Major Head 2076 and Minor Head 800 B(a)2 of the Defence services Estimates (Army) and relevant Heads of Nayy, Air Force and Coast Guard.

Sd/-
(Santosh)
Joint Secretary to the Government of India 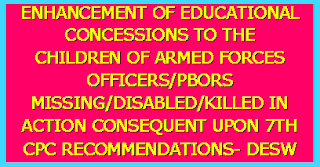