F.No. 225/270/2017/ITA.II
Government of India
Ministry of Finance
Department of Revenue
Central Board of Direct Taxes

Under the provisions of recently introduced section 139AA of the Income-tax Act, with effect from 01.07.2017, all taxpayers having Aadhar Number or Enrolment Number are required to link it with PAN Number for filing the tax return. The said provision was relaxed by the Central Board of Direct Taxes (`CBDT') vide its order dated 31.07.2017, in file of even number, wherein further time till 31.08.2017 was allowed to the taxpayers to link Aadhar with PAN.

On consideration of the matter, CBDT, in exercise of powers conferred under section 119 of the Act, modifies para 3 of its earlier order dated 31.07.2017 and further extends the time for linking Aadhar with PAN till 31.12.2017. 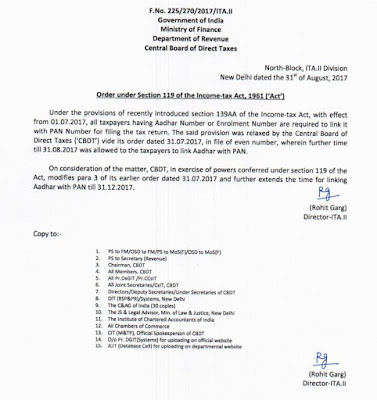