No. 17(01)/2017(01)/D(Pension/Policy)
Government of India
Ministry of Defence
Department of Ex-Servicemen Welfare

The undersigned is directed to refer to this Ministry's letter No. 17(01)/2016 D(Pen/Pol) dated 29th October 2016 for revision of pension of pre-2016 Defence Forces pensioners/ family pensioners in implementation of the Government decisions on the recommendations of the 7th CPC. As per para 9 of this Ministry's said order dated 29th October 2016 the revision of disability element of disability pension was held in abeyance pending decision of National Anomaly Committee to whom matter was referred by MoD to decide methodology for calculation of disability element of disability pension under 7thCPC. The National Anomaly Committee has recommended that parity with Civilians for grant of Disability element which was granted to Defence Forces under 6th CPC, shall be maintained

3. Para 13 of this Ministry's above quoted letter dated 29.10.2016 regarding "Ex-gratia awards to Cadets in cases of disablement" shall be replaced with the following:

13. EX-GRATIA AWARDS TO CADET (DIRECT) The ex-gratia award payable to Cadet (Direct)/ NoKs in cases of disablement / death shall be payable subject to the same conditions as hitherto in force in the event of invalidment on medical ground / death of a Cadet (Direct) due to causes attributable to or aggravated by military training :-

4. The dearness relief sanctioned by the Government from 1.1,2016 and thereafter, shall also be paid on rates of disability element and monthly ex-gratia award to Cadet(Direct), revised in accordance with the provision of this letter.

5. Vide para 10(ii) of MoD order dated 29.10.2016, it was ordered to pay the Constant Attendance Allowance(CAA) at the existing rate since matter regarding grant of Allowances was under examination by the Committee on Allowances (CoA). in this regard, Ministry of Finance vide Resolution dated 6th July 2017 (Appendix 11 item 37 has accepted the recommendation of 7th CPC to enhance the existing Constant Attendance Allowance @ 4500/ p.m. by 50%. DoP&PW vide 0.M No. 1/4/2017-P&PW(F) dated 2.8.2017 has issued orders in this regard for civilian pensioners. Accordingly, for Armed Forces personnel the Constant Attendant Allowance shall continue to be admissible under the condition as hitherto fore at the existing rate from 1.1.2016 to 30.06.2017. However, it shall now be admissible at the enhanced uniform rate of Rs. 6750/- per month, irrespective of the rank with effect from 1.7.2017.

6. With reference to the provisions contained in Para 5.4 of this Ministry's letter dated 29th October, 2016, it is further clarified that the maximum ceiling shall be applicable only in the case of Service/Retiring Pension, Service element of Disability/ liberalized disability /War Injury Pension and Ordinary family Pension. The said ceiling is not applicable in the cases of Disability/ Liberalised Disability/ War Injury element. Special Family/ Liberalized Family Pension etc. applicable under casualty pensionary awards.

Sd/-
(Manoj Sinha)
Under Secretary to the Government of India 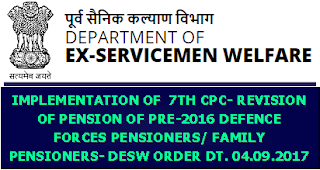