No. 10(1)2017/D(Estt/NG)
Government of India
Ministry of Defence
(Department of Defence Production)

Subject.: Payment of Productivity Linked Bonus to Civilian Employees of Defence Production Establishments for the year 2016-17.

I am directed to refer to this Ministry's Letter No. 48(4)/98/1)(B&C) dated 27th July, 2000 on the above subject and to convey the sanction of the President to payment of Productivity Linked Bonus for the year 2016-17 equivalent to 40 days wages to the eligible employees in Defence Production Establishments as —mentioned therein with an overall ceiling of wages of Rs. 7000/- per month.

2. The casual labour who has worked for at least 240 days, in each year, for 03 years or more will be eligible for this PLB payment. The amount will be paid on a notional monthly wages of Rs. 750/-.In case where the actual emoluments fall below Rs. 750/-per month, the amount will be calculated on actual monthly emoluments. All payments under these orders will be rounded off to the nearest rupee.

3. The above sanction is subject to the following conditions:-

(a) OFB will submit a monthly status report on the progress achieved to review the formula for calculation of PLB which otherwise would have been reviewed after three years from implementation i.e. from the accounting year 1999-2000.

(b) GMs of each of the respective factories should submit the Certificate regarding standard man-hours for jobs whenever there is a change in production processes or.

In the event of more than one CNC Machine being installed on two different occasions, each time figures are to be updated for additional subsequent addition of CNC Machine.

(c) DGA(OFys), Kolkata in her DO dated 08.08.2016 addressed to Secretary, Ministry of Defence has intimated regarding inconsistencies in calculation of Productivity Linked Bonus in respect of OFB/DGQA etc. DGA. (OFys). Kolkata has observed that OFB has taken the average number of days in a month as 30 days while in respect of Army Defence Corps, the average number of days for calculation of PLBs adopted is 30.4 days. OFB is therefore, requested to review the method of calculation for payment of PLB in the light of the observations given by the Director General of Audit (OFys), Kolkata in the DO letter dated 08.08.2016. Till the issue raised by DGA (OFys), Kolkata is settled, payment of PLB may be calculated taking the average number of days as 30.4 days.

4. The expenditure will be debited to Major Head 2079 of the Defence Services Estimates (Ordnance Factories) and to the respective Heads to which the pay and allowances of employees of allied establishments arc debited.

Sd/-
(Amlan Das)
Under Secretary to the Govt. of India 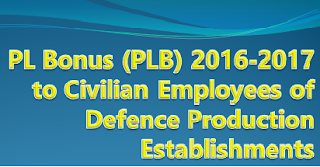