WFTU-TUI-PENSIONERS AND RETIREES CALL FOR THE OCTOBER 1ST, 2017: INTERNATIONAL DAY OF FIGHT FOR PENSIONERS’ RIGHT

“If we all stand together we are a force that can shake the whole world”.

All Office bearers and the Secretaries General
of Constituent Organizations

Finance Capital is pushing new anti-worker measures against pensioners, the working class and the people. The measures taken by the rulers of the world, with the competitiveness of corporates as the only motto, impose new sacrifices on the working class, pensioners, pave way for greater exploitation, and the elimination of all existing rights of the working class. Greater limitation/ abolition of public social care for the benefit of the private sector, annulment of collective agreements and extra payments to pensioners; in addition, to a further reduction of costs for health, medicines, and social benefits are meted out without any compunction.

All this is complemented by new concessions to the big corporate, through privatizations of important sectors of the economy- energy, transport, water, natural resources- and new tax exemptions. In the name of corporate competitiveness, pensioners and retirees throughout the world are made to face the worsening of their lives and the lives of their children. Their pensions are cut, health benefits are reduced and privatized, social structures dissolved and their rights are generally restricted.

PFRDA Act: In India, The Pension Fund Regulatory & Development Authority Act was passed on 19th September, 2013 and the same was notified on 1st February, 2014. PFRDA is regulating NPS, the funds subscribed by employees of Govt. of India, State Governments and by employees of private institutions/organizations & unorganized sectors.

New Pension Scheme: Defined Contributory Pension Scheme does not guarantee returns. Benefits depend on how the investment has fared in the stock market. The stock markets have never remained strong over a long period of time. It is not only volatile but susceptible to manipulation and machinations. There is no family pension and Commutation facility in this Scheme. There is no DA to the Pension. The global financial crisis in 2008 was the product of investments in derivative manipulations. It wiped out the earnings of lakhs of workers, employees, teachers and many others. No Government came to render help to those unfortunate losers, whereas bail-out packages of millions of dollars was rolled out to rescue culprits. On one “fine”morning, the workers lost everything including hope.

Large numbers of employees have joined the Central Services since 2004 and so is the case with the various State Governments, who have adopted the Defined Contributory Pension Scheme in replacement of Defined Benefit Pension Scheme. It is estimated that they presently constitute almost one-third of the total employees in Government departments in the country. A detailed study of the functioning of the Contributory Pension Scheme has proved that the promised better returns in the form of Annuity are nothing but an ever eluding mirage.

The younger generation employees need to realize that their hard earned savings are being channelized into the hands of the monopoly capital to subserve their efforts in maximization of profit. The Younger Generation have to understand the politics behind the policies and the pernicious impact of the neo-liberal economic policies on the life and livelihood of the multitude of their countrymen and join the global and national resistance being built against the globalization policies for the intensification of which pension reform process and informalisation of employment was ushered in by the World bank and IMF.

Repeal of Pension Act: In accordance with the policy of Government of India to repeal obsolete Acts, the question of repeal of Pension Act, 1871 has been under serious consideration for some time in the past. In this connection it is strongly felt that the Pension Act, 1871 has to be excluded from the list of the obsolete Acts to be repealed as some of the provisions of the Act provide security to the pensioners against attachment and assignment of pension. It is a potential threat that the protection against attachment by courts provided in the Pension Act, 1871 will eventually be taken away from the statute if the same is repealed. Apart from Government servants of Central/State, Government Pension is being granted to retiring employees of many quasi Government organizations and freedom fighters. The repeal will be a death blow to the social security schemes which has been a right.

Pensioners Option I recommended by 7th CPC is not Considered. The Committee Chaired by the Secretary (Pension) has not recommended the Option Number – 1 recommended by 7th Central Pay Commission for fixation of pension of pre – 2016 Pensioners. Instead it has recommended extension of the benefit of pension determination recommended by 5th CPC i.e. arriving at notional pay in 7th CPC by applying formula for pay revision for serving employees in each Pay Commission revision and consequent pension fixation. Thus, the one and only favourable recommendation of 7th CPC ie; the real parity in Pension which is also approved by Cabinet with a rider "subject to feasibility" was mercilessly rejected by Government, in spite of repeated requests and demands from Confederation of Central Govt. Gazetted Officers' Organisations (CCGGOO), NCCPA, CCGEW, NJCA and other C.G employees & Pensioners Associations.

3. Public and Free medical and Pharmaceutical assistance for everybody without restriction and limitation

4. Public Pension that guarantee our current needs in order to have a dignified life

Hence the CCGGOO endorses the Call of World Federation of Trade Union –Trade Union International - Pensioners and Retirees to observe 1st October 2017 as the international day of fight for the pensioners rights. Since 1st October is falls on holiday, CCGGOO requests its affiliates to observe the call of International day of Pensioners Rights on any one of the day in the 1st week of October by holding General Body meeting, Demonstrations, Conventions, and all other form of protest as well as awareness programmes with demands that correspond to our true needs, having as perspective, a society without exploitation, poverty, wars, calamities. Let us fight with unity and join the common action of the working class, the people, and all those who suffer corporate exploitation.

We are not in for crumbs that the corporate barbarity gives

We fight for life and future in a society without exploitation

Let us make a great success of October 1st-Fighting Day. 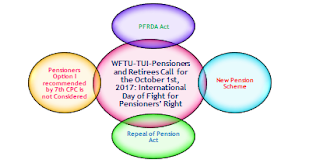