Subject: Recommendations of the 7th Central Pay Commission-Revision of rates of Annual Allowance in respect of Central Health Service Officers.

`At the end of financial year, each Specialist/ General Duty Medical Officer will be required to furnish a certificate to the effect that the amount of Annual Allowance has been utilized for the purpose it was drawn. In the case of retirement/resignation before the end of the financial year, such a certificate will be furnished at the time of such retirement/resignation.

2. The rates of these allowances will be increased by 25 % each time the Dearness Allowance payable on revised pay scale rises by 50%. 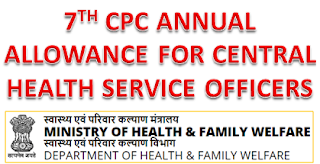