BHARATIYA PRATIRAKSHA MAZDOOR SANGH
(AN ALL INDIA FEDERATION OF DEFENCE WORKERS)
(AN INDUSTRIAL UNIT OF B.M.S.)
(RECOGNISED BY MINISTRY OF DEFENCE, GOVT. OF INDIA)
CENTRAL OFFICE: 2-A, NAVEEN MARKET, KANPUR – 208001

With due regards, it is submitted that the industrial personnel in Min of Defence have been authorized for protective clothing/garments such as water-proofs, warm overcoats, overall, Dangries, Apron and protective accessories such as gum boots, boiler suits, goggles and gauntlets etc. These protective clothing & accessories are being issued to the specified categories whose duties require the issue of these accessories. Protective garments and accessories are provided either as a protection against inclement weather for those who works out-doors or against hazards such as are encountered in factories etc (kindly refer Para 1 & 2 of Chapter 64 – Staff Amenities, 3rd CPC Report and Para 26.44 of 4th CPC Report).

For the washing of some of these protective clothing garments, all the concerned industrial workers employed in Army Ordnance Corps were granted ‘Washing Allowance’ Rs. 4/ per month per worker and this amount was revised to Rs. 8/- per month vide MoD letter No. 82147/P.Clo/OS- 10A/2876/D(O-II), Dated 08 Sep. 1998 (copy enclosed).

Later, a corrigendum was issued vide MoD Letter No. 82147/P.Clo/OS-10A/1626/D(O-II), Dated 06 May 1999 (copy enclosed) to define that “Washing Allowance” mentioned in the letter dated 08.09.1998 will be “Washing Expenditure”. In due course, this “Washing Expenditure” has been revised on the introduction of subsequent Central Pay Commissions.

Now, on the recommendation of 7th CPC “Washing Allowance” being granted for the washing of uniform has been abolished and subsumed in dress allowance in respect of Nurses as per DoE, Min of Fin, Resolution No. 11-1/2016-IC, Dated 06.07.2017. It has to be kept in the mind that the “Washing Expenditure” being granted to industrial personnel for washing of protective clothing has not been abolished or subsumed in the dress allowance and there is no mention of “Washing Expenditure” in the 7th CPC’s Report or in the Resolution of Govt of India dated 06.07.2017.

In such circumstances, you are requested to take appropriate action so that entitled industrial employees may be granted the “Washing Expenditure” unflagging with revised rate. 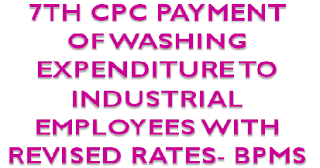