In partial modification of Board's letter of .even number dated 24.08.2017 on the subject, it has been decided by Board that para 2. A (i) & Op may be modified to read as under:

(i) Officers in level 14 and above, while on tour may be entitled for Air Travel in "J"/ Business Class.

(ii) All other Officers, otherwise authorized to travel by Air may be entitled to Travel by economy class.'

Further, it has also been decided by Board that in partial modification of item I (vii) of Board's letter No. 2015-B-235 dated 21.07.2017, Officers in JAG/SG would be entitled for one way travel by economy class, if required on justification that Air travel is unavoidable. For JAG/SG cases of Air Travel, conditions mentioned in Note under para-22 of Delegation of powers to GM circulated vide Board's letter No. F(X)II-2015/PW/7 dated 12.06.2017 will need to be complied with.

3. These orders will take effect from the date of issue of this letter. 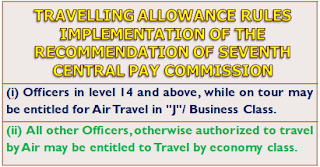