Fixation of the pay of the pre-revised pay scale of 1S scale granted to candidates appointed as trainees on compassionate grounds in the Seventh Central Pay Commission (7th CPC) – reg, Dt. 09th Oct, 2017

No. 14014/2/2009-Estt.D
Government of India
Ministry of Personnel, Public Grievances and Pensions
(Department of Personnel & Training)

Sub:- Fixation of the pay of the pre-revised pay scale of 1S scale granted to candidates appointed as trainees on compassionate grounds in the Seventh Central Pay Commission (7th CPC) — reg.

The undersigned is directed to invite attention to this Department's O.M.No.14014/02/2012-Estt(D) dated 16.01.2013 containing consolidated instructions on the subject of compassionate appointments. With regard to appointment of candidates not immediately meeting the educational standards as trainees these instructions provide as under:-

"In exceptional circumstances Government may consider recruiting persons not immediately meeting the minimum educational standards. Government may engage them as trainees who will be given the regular pay bands and grade pay only on acquiring the minimum qualification prescribed under the recruitment rules. The emoluments of these trainees, during the period of their training and before they are absorbed in the Government as employees, will be governed by the minimum of the —1S pay band Rs.4440-7440 without any grade pay. In addition, they will be granted all applicable Allowance, like Dearness Allowances, House Rent Allowance and Transport Allowance at the admissible rates. The same shall be calculated on the minimum -IS pay band without any grade pay. The period spent in the -1S pay band by the future recruits will not be counted as service for any purpose as their regular service will start only after they are placed in the pay band PB-1 or Rs.5200-20200 along with grade pay of Rs.1800."

2. The 7th CPC has not provided any replacement scale for 1S pay, band of Rs.4440-7440 without any grade pay which is granted to trainees appointed under the scheme for compassionate appointment. The matter was taken up with the Department of Expenditure and it has now been decided by the Government that Level-1 of the Pay Matrix introduced on implementation of the 7th CPC Report be the replacement for the pre-revised- 1S scale. The pay of those governed by the 1S scale may be revised by using the Fitment Factor of 2.57 for placement in Level-1 in conformity with the Rulk, 7 of the CCS (RP) Rules, 2016. All prerevised pay stages lower than pre-revised pay of Rs.7,000 in the pre-revised 1S scale shall not be considered for determining the benefit of bunching, on the same lines as has been clarified by this Department's 0.M dated 03.08.2017 on application of the benefit on account of bunching. 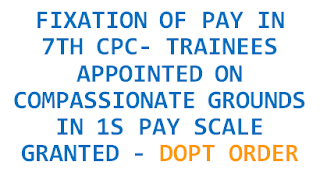