HRA- REPORT OF THE COMMITTEE ON ALLOWANCES

At present, in the case of those drawing either NPA or MSP or both, HRA is being paid as a percentage of BP+NPA or BP+MSP or BP+NPA+MSP respectively.

Recommendations of 7th CPC: It has been retained and rationalized. After applying a multiplication factor of 0.8, the rates have been revised downwards to 24 percent, 16 percent and 8 percent of the Basic Pay for X, Y and Z class cities, respectively.

Add-ons like NPA, MSP, etc. should not be included while working out HRA.

III. M/o of Law & Justice- D/o Justice: Cities having population of more than 1 crore may be granted HRA @ 30%.

Analysis and Recommendations of the Committee:

The Committee has the following observations on the recommendations of the 7th CPC on HRA:

(III) While the rents for residential accommodation have not gone up significantly in the recent past and might also have fallen in some areas, the HRA at the rates recommended by the 7th CPC at the lower levels might not continue to be adequate as per the prevailing market rent.

In view of these observations, the Committee has deliberated upon the following three options which separately, or in combination, can be suggested by way of modifications to the 7th CPC recommendations:

This would have no immediate financial implication and the 1st revision, as per the current trend of increase in DA, is expected to occur in July, 2018.

Option (ii): Instead of advancing the full restoration of HRA rates, the Committee considered splitting the revisions proposed by 7th CPC as under:

The financial implication would be similar as in Option (i) except that the timing of the revision would undergo a change.

The additional financial implication is estimated to be ₹ 385.00 crore and around 7.70 lakh employees shall be benefited. After a detailed consideration of the above options, the Committee recommended that either only option (iii) or option (iii) in combination with option (ii) be accepted. A final decision in this regard may be taken by E-CoS. 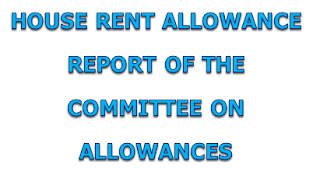