Time-limit for submission of claims for Travelling Allowances

No.19030/1/2017-E.IV
Government of India
Ministry of Finance
Department of Expenditure

Sub: Time-limit for submission of claims for Travelling Allowances – regarding.

3. The date of submission of the claims shall be determined as indicated below:-

4. In the case of claims falling under category 3(ii), which are presented to the Treasury after a period of sixty days succeeding the date of completion of journey, the date of submission of the claim

will be counted from the date when it was submitted by the Govt. servant to the Head of office/Controlling Officer within prescribed time-limit of sixty days.

5. A claim for Travelling Allowance of a Govt, servant which has been allowed to remain in abeyance for a period exceeding one year should be investigated by the Head of the Department concerned, lf the Head of Department is satisfied about the genuineness of the claim on the basis of the supportive documents and there are valid reasons for the delay in preferring the claims, the claims should be paid by the Drawing and Disbursing Officer or Accounts Officer, as the case may be, after usual checks.

6. These orders are not applicable in r/o Leave Travel Concession (LTC) claims which are governed by separate set of rules of DoPT.

7. These orders shall be effective from the date of issue of this O.M.

8. ln so far as the persons serving in the Indian Audit & Accounts Department are concerned, this order issues in consultation with the Comptroller & Auditor General of India.

Sd/-
(Nirmala Dev)
Deputy Secretary to the Government of lndia 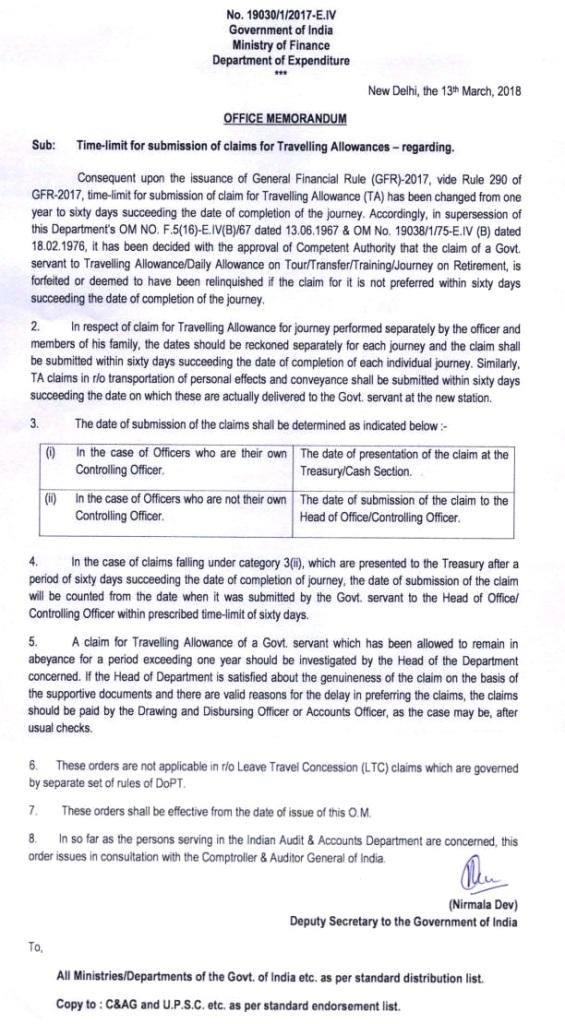