Grant of additional pension to the pensioners of U.T. Chandigarh

Sub: Grant of additional pension to the pensioners of U.T. Chandigarh –reg.

I am directed to refer to your UO No. CPAO/IT & Tech/U.T. Chandigarh/50/2016-17/167 dated 14th December 2017 on the above subject and to say the in accordance with Rule-2 of CCS (Pension) Rules, these rules are applicable to Government servants appointed substantively to civil services and posts in connection with the affairs of the Union. As mentioned in your note dated 24.4.2017, the employees and pensioners of U.T. Chandigarh are governed by the rules and orders as applicable to the employees of Punjab Civil Services. However, the employees of other U.T. Administrations are governed by the rules regulating the service conditions of Central Government employees.

2. MHA, in their OM dated 24.3.1984 has also clarified that the employees of Union Territory Administration other than Chandigarh are governed by CCS (Pension) Rules, 1972 and that the pay scales and conditions of service of employees of Chandigarh Administration are not covered by the rules governing Central Government employees. Thus, there is no inconsistency in the note dated 24th March, 1984 of MHA. Therefore, there is no need for any amendment to the note of MHA.

Sd/-
(S.K. Makkar)
Under Secretary to the Government of India. 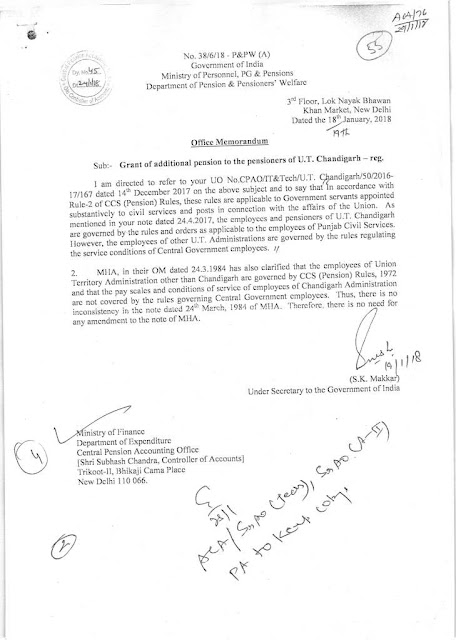