The All-India CPI-IW for March, 2018 remained stationary at 287 (two hundred and eighty seven). On 1-month percentage change, it remained static between February and March, 2018 when compared with the increase of (+) 0.36 per cent between the corresponding months of previous year.

The indices of 37 centres are above All-India Index and 38 centres’ indices are below national average. The index of Mumbai, Chandigarh and Jabalpur centres remained at par with All-India Index.

The next issue of CPI-IW for the month of April, 2018 will be released on Thursday, 31st May, 2018. The same will also be available on the office website www.labourbureaunew.gov.in. 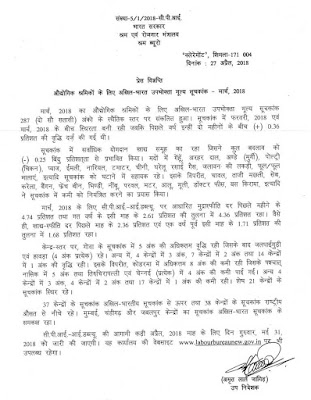