(a) As per Circular under reference LPC-cum-datasheet (Hard-copies generated through Utility) duly verified by LAO/CDA/PAO has to be forwarded by Head of the Offices alongwith softcopy i.e. M S Access Utility (available in this website) in Compact Disk. 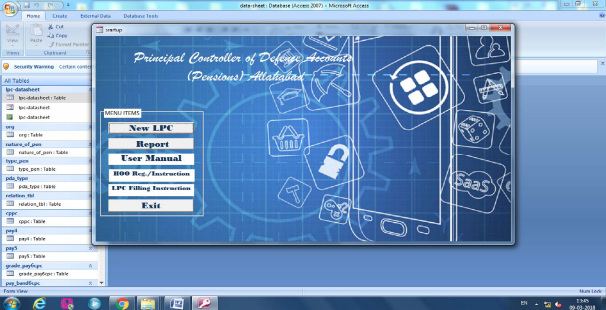 (b) LPC-cum-datasheets are received without obtaining HOO-ID, which is compulsory requirement of processing of cases through software. As e-PPO is to be transmitted electronically to H.O.O. e-mail id.

(c) Hard copies of LPC-cum-data sheets are being received without vetting of Pay Details from CDA/LAO/PAO.

(d) Capacity of Utility is more than 1000 number of records. However, Utility containing single record for each pensioner is being received, which makes uploading difficult. (e.g. one CD contain record of one pensioner and for 20- cases, 20-CDs are sent)

(f) Field/structure of MS Access utility are being modified by some units at their own level resulting rejections at the time of uploading of data in system.

(h) Retiring pay scale (respective column with reference to pay commission wherein date of retirement of pensioner fall) and pay in “Pay Detail” column of LPC-cum-datasheet are being left blank.

(i) In-correct/in-complete Pension Disbursing Authority details are being filled-in “PDA Details column” of LPC-cum-datasheet. For example- Old 4-5 digit Bank A/c number are being mentioned instead of latest Bank A/c Number.

(j) LPC-cum-datasheet in respect of pensioners, who are drawing Compulsory retirement pensions, Compassionate allowance pension, Post- 2016 retiree and are not eligible for revision (For example: cases where only gratuity has been sanctioned, cases where family pensioner was entitled for family pension only prior to 01.01.2016 etc.) under above orders are being received from Head of the offices.

(l) Same record is being forwarded in Utility with each batch of LPC-cumdatasheets. In other words duplicate records are sent for revision.

(m) CD containing Utility are not being properly attached with LPC-cumdatasheets in secure manner resulting damage to or lost in transit of Compact Disk.