In accordance with the provisions of Sub Section (1) of Section 22 of the Industrial Disputes Act, 1947, we hereby notify that all the Gramin Dak Sevaks will go on indefinite strike from 22.05.2018. The demands for acceptance on which the employees embark upon this Indefinite Strike are detailed in the Charter of Demands enclosed. 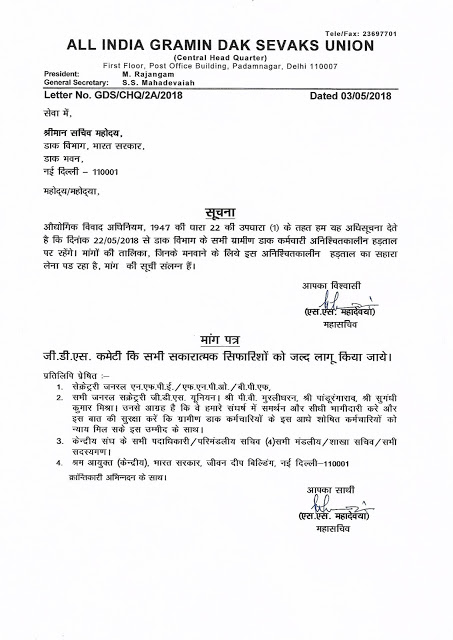 To
All Circle/Divisional/ Branch Secretaries of AIGDSU AND NUGDS All India Office Bearers...

We have been resorting to various agitational programmes including indefinite strike for implementing GDS Committee recommendations. We have also brought the matter to the notice of Finance Minister and Prime Minister requesting their interference for on early implementation. But in Vain.

All the GDS throughout the country are in unrest and frustration for inordinate delay. Much pressure is there on all unions from rank and file.

Keeping the circumstances in view GDS JCA consisting of AIGDSU and NUGDS decided to go on indefinite strike from 22-05-2018 demanding for implementation of all positive recommendations of GDS committee immediately. Indefinite strike notice was served to the Secretary Department of posts by GDSJCA on 03-05-2018.