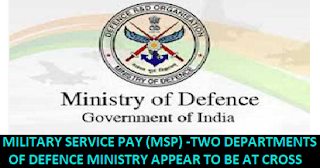 A procedural wrangle between the Defence ministry and the Finance ministry is keeping at bay the implementation of leave encashment.

Pune-based Principal Controller of Defence Accounts (Officers) (PCDA) has not included MSP as part of pay for calculation of leave encashment for 300 days and 10 days leave encashment allowed each year.

The move would lead to a monetary loss of around 1.40 lakh defence personnel, sources in the Defence ministry told UNI.

In the 6th Central Pay Commission (CPC), the MSP was granted to Defence personnel in place of Rank, Pay and Compensation for edge in pay. It was treated as pay for all purpose, except for calculation of annual increment. While in 7th CPC, the MSP was to be counted as pay for purpose of computation of dearness allowances and pension.

The Department of Ex-Servicemen Welfare (DESW) has included MSP as part of its reckonable emoluments in the pension order. For the same case, the PCDA has sought clarification from the Department of Defence (DoD).

The DESW and DoD come under the purview of the Defence ministry.

For more clarity, the DoD has requested the Finance ministry for assistance. The guidelines are still awaited.

As per the sources, a large number of pay and allowances are still pending with the DoD, impacting over 13.5 lakh personnel.

It would accrue a loss of Rs 1.55 lakh to each military officer and Rs 60,000 to each Junior Commissioned Officer (JCO) and Other Ranks (OR).