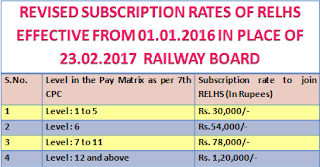 GOVERNMENT OF INDIA
MINISTRY OF RAILWAYS
RAILWAY BOARD

General Managers
All Indian Railways including PUs and RDSO.

Vide Board’s letter cited under reference, the subscription rate to join RELHS was revised with effect from 23.02.2017. Thus, the current rate of subscription to join RELHS for retiring railway employees is last month’s basic pay drawn or the amount enumerated in the table below for different pay levels (as per 7th CPC), whichever is lower:-

After careful consideration in the matter, it as now been decided that the revised rate of subscription for joining RELHS would effective from 01.01.2016 in place of 23.02.2017. The excess amount, if any, deducted from the railway employees / family pensioners who retired / sanctioned pension from 01.01.2016 to 22.02.2017 (both dates are inclusive), may be refunded. It will be incumbent upon the department/branch, which paid the settlement dues to the retired employees/ family pensioner, between ‘01.01.2016 to 22.02.2017 (both dates are inclusive), to credit the excess amount recovered, if any, in one go in the bank account of the employee / family pensioner in which the settlement dues was credited. The due amount shall be initiated by the bill preparing authority for the retired employee and shall be passed by the Accounts Department after due internal check. This would be done without any application from the employee / family pensioner.

This issues in consultation with Finance Directorate in the Ministry of Railways.