F.No.116-57/2014-SB
Government of lndia
Ministry of Communications
Department of Posts

Subject:- Amendments in statutory rules of Sukanya Samriddhi Account Rules 2016 by Ministry of Finance (DEA) regarding.

The undersigned is directed to enclose a copy of Gazette Notification No.456 dated 06 July 2018 regarding G.S.R.617 (E) dated 05 July' 2018 issued by MOF(DEA) for information and necessary action.

2. As per this notification, in the Sukanya Samriddhi Account Rules' 2016, in rule 5, in sub -rule (1), for the word “one thousand rupees" the following words- "two hundred and fifty rupees" shall be substituted.

3. lt is requested to circulate this SB Order along with copy of attached notifications to all concerned immediately. Necessary amendments to CBS and Sanchaya Post softwares will be made.

This issues with the approval of competent authority. 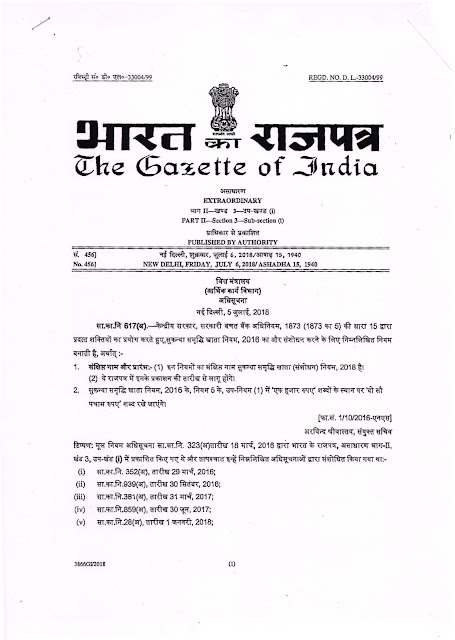 THE GAZETTE OF INDIA: EXTRAORDINARY [PART II-SEC. 3(i)]
MINISTRY OF FINANCE
(Department of Economic Affairs)

G.S.R. 617(E). In exercise of the powers conferred by section 15 of the Government Savings Bank Act. 1873(5 of 1873), the Central Government hereby makes the following rules further to amend the Sukanya Samriddhi Account Rules, 2016, namely:-

1. Short title and commencement:- (1) These rules may be called the Sukanya Samriddhi Account (Amendment) Rule 2018.

(2) They shall come into force with effect from the date of publication in the Official Gazette.

2. In the Sukanya Samriddhi Account Rules, 2016, in rule 5, in sub-rule (1), for the words "one thousand rupees" the following words "two hundred and fifty rupees" shall be substituted.