ECHS
Home ECHS NO REFERRAL TO BE IN THE NAME OF ANY PRIVATE EMPANELLED MEDICAL FACILITY- CHANGE IN SYSTEM OF REFERRAL: ECHS

NO REFERRAL TO BE IN THE NAME OF ANY PRIVATE EMPANELLED MEDICAL FACILITY- CHANGE IN SYSTEM OF REFERRAL: ECHS

Pay Commissions ECHS
No referral to be in the name of any private empanelled medical facility- Change in system of referral: ECHS

Change in system of referral - No referral to be in the name of any private empanelled medical facility, Dt. 03rd Aug, 2018

CHANGE IN SYSTEM OF REFERRAL : NO REFERRAL TO BE IN THE NAME OF ANY PRIVATE EMPANELLED MEDICAL FACILITY

2. As per above referred letter the name of Empanelled Medical Facility is not to be mentioned in the referrals issued from ECHS Polyclinics. The directions of DoESW is to be implemented forthwith and necessary changes to be carried out in the referral issue software. UTl-ITSL to carryout changes in the claim ID system with immediate effect to implement these guidelines. A continuation of the implementation is to be provided to all ROS and CO ECHS with detailed instructions by UTI-ITSL & SDCPL.

3. All ECHS Regional Centres to ensure that this letter is circulated to all ECHS Polyclinics for immediate implementation. No repeat No referral to be generated from SITL software since modification required to be implemented cannot be carried out in that Software. All referrals to be generated from UTI-ITSL software / the new bridge under development with UTI-ITSL and M [is Source Dot Com Pvt Ltd. Further, content of Para 5 of the Govt letter is also to be simulated to all Empanelled Medical Facilities for strict compliance.

Subject: Change in System of Referral-No referral to be in the Name of any Private Empanelled Medical Facility.

The undersigned is direct to state that as per the Ministry of Health & Family Welfare OM No. Z15025/105/2017/DIR/CGHS/EHS dated 09.11.2017 the CGHS doctor / Government Specialist shall not refer the beneficiary to any particular empanelled hospital by name but shall specify the treatment procedure and mention “referred to any CGHS empanelled centre”

2. ECHS has to follow the CGHS Norms. However, it is seen that doctors at CHS Polyclinics are issuing referrals by name to specific Pvt. Empanelled Medical

3. In view of the above, it has been decided by the competent authority that henceforth no ECHS doctor will issue referrals by name to any Pvt. Empanelled, medical Facility. The ECHS doctors shall mention on the prescription the treatment, procedure/tests required by the ECHS beneficiary and then write as follows:

“Referred to any ECHS Empanelled Medical Facility located within the Area of Responsibility of Regional Centre, (Name of City).”

4. CO, ECHS and RC, ECHS will ensure that the list of Pvt. Empanelled Medical Facilities along with the medical treatment procedures/tests for which they have been empanelled is prominently displayed on the website of ECHS, Regional Centre wise. OIC, of every Polyclinic, will be responsible for ensuring that hard copies of this list downloaded from ECHS website is kept in the Polyclinic in sufficient numbers and given to the ECHS beneficiary whenever demanded. If any change lakes place in this list, it shall be the responsibility of Director RC, ECHS concerned .o ensure display of the corrected/amended list on the website of ECHS without any delay.

7. The above orders shall come into force with immediate effect. 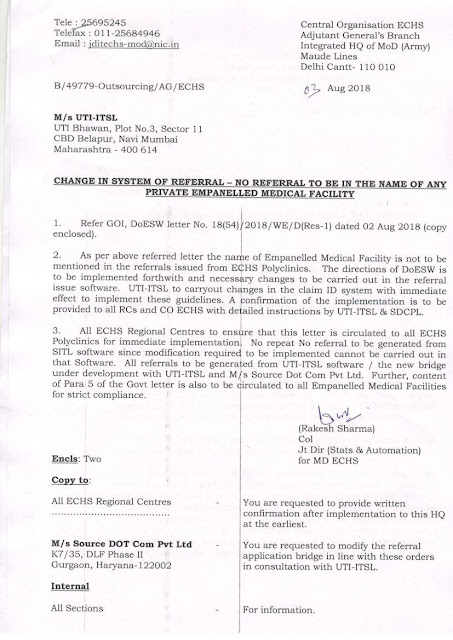 Email ThisBlogThis!Share to TwitterShare to FacebookShare to Pinterest
Labels: ECHS