The key highlights of the Interim Budget 2019-20 presented by the Union Minister for Finance, Corporate Affairs, Railways & Coal, Shri Piyush Goyal in Parliament today are as follows: 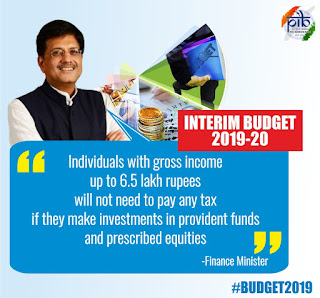 ·TDS threshold for deduction of tax on rent to be increased from Rs. 1,80,000 to Rs. 2,40,000
·Benefit of rollover of capital gains increased from investment in one residential house to two residential houses for capital gains up to Rs. 2 crore.
·Tax benefits for affordable housing extended till 31st March, 2020 under Section 80-IBA of Income Tax Act
·Tax exemption period on notional rent, on unsold inventories, extended from one year to two years

State of the Economy

·Exemptions from GST for small businesses doubled from Rs. 20 lakh to Rs. 40 lakh
·Small businesses having turnover up to Rs. 1.5 crore pay only 1% flat rate and file one annual return only
·Small service providers with turnover upto Rs.50 lakhs can opt for composition scheme and pay GST at 6% instead of 18%
·Soon, businesses comprising over 90% of GST payers to be allowed to file quarterly return

Customs and trading across borders

Vision for the next Decade

Ten dimensions of Vision for India of 2030

India would be a modern, technology driven, high growth, equitable and transparent society